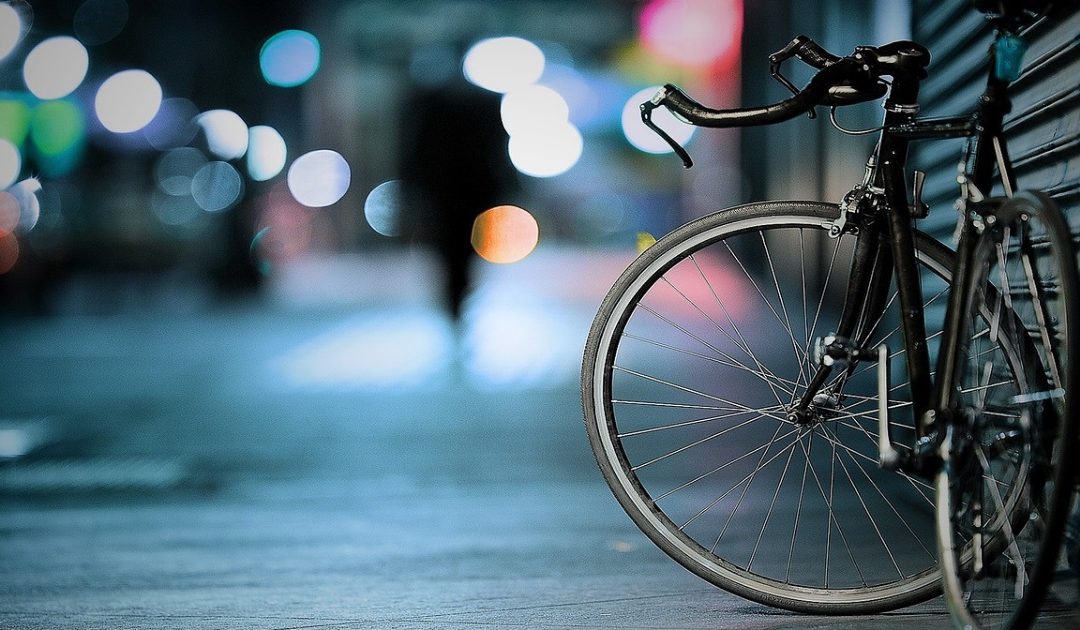 This is how I usually classify my fellow cyclists in the madness of Cologne’s bicycle traffic. But let’s get to the point: The cycling chaos on bake lanes, (bicycle) roads and on the sidewalk as well (in Berlin, for example, where it is common practise because they are so wide) as soon as it gets warmer. What do I think about that? If I now tell you that I like cycling in spring and summer, but still prefer it in fall and winter, you can probably guess the answer.

As soon as it gets warmer and rains less, the streets of Cologne are filled not only by the daily bicycle commuters but by everybody. Everyone who wants to get out, do something for their health, leave the car in the garage and so on and so forth. In principle, that’s laudable. I’m a great advocate of cycling. I very rarely leave the bike at home. Or to be precise – the bikes. That’s because I have several of them. Of course, they hang on the wall totally hipster-style… Should I have a flat tire, it goes without saying that the next day I still need to be able to take my half-hour commute through the inner city of Cologne.

The cyclists can be divided into different categories. In warm months, the leisure cyclists make up an additional group. Let’s start with the most common group:

The “I-like-to-take-a-closer-look” (at the bike, not the rider) fellow cyclists

Those who appear in front of me and behind me more or less the entire way. The likable ones who live in my ‘hood and also cross the Rhine every day on their way to work. Usually on a racing bike or fixie or single-speed bike (yes, me too). Of course, we all start our journey in the hip district of Ehrenfeld. Using low-step-through models would be absurd. Most of them are ok. They make room when you want to pass, and about 70 percent of the time they obey traffic rules. We get along. This is because they drive often and know how low the tolerance threshold for errors made by others will be at some point – and therefore they do wrong little themselves. So it’s a win-win for both sides. Most of them know each other well at some point in time.

Let’s talk about the recreational cyclists

They often feel a little overwhelmed in the stream of commuters, don’t indicate when they turn – let alone when they just stop on the bike lane. You are considerate of them and try to overtake them as quickly as possible. Because in principle, I’m happy about everyone who leaves the car in the garage and gets on a bike. Actually, I only wish for two things in this category: indicate when you turn or stop and look behind you from time to time to check if it wouldn’t be nice to let 20 cyclists pass. Okay, one more thing: don’t crank up the music on your headphones so loud that you can’t hear my bell. It’s very easy. I do it myself.

You can tell them by their unpredictable driving style. It varies between slow and absurdly slow. Meandering driving, and when you pass them, you can bet they hold a mobile phone. Right. I knew it. They’re totally dangerous. For everyone. Period. There are several alternatives: like, use your mobile at the traffic light. When it’s red, of course. Put your phone away and get it out when you arrive at your destination. Sounds weird, but it’s actually doable. One can survive without a phone for 20 or 30 minutes. But 20 to 30 minutes on the bike lane with mobile phone cyclists: there’s no guarantee. Mobile phone in your hand and cycling: that’s an absolute no-go. It really makes me mad. And I’m telling them as well. Right here and on the bike lane.

The cyclists with outdoor warning vests, lots of reflective bits on their bikes, mileometers and GPS. Not for me. Too tense and sometimes, unfortunately, aggressive. They wear their bike outfits with pride and don’t dispense with balaclava and gloves even when it’s too warm for that. With yellow neon, of course. Sure, they’ll be seen. Even from outer space. But somehow they look like they’re in a war, not on the road. And that’s how they drive as well. I own the road – and the bike lane anyway. They probably write to the bike commissioner to report parking offenders every day. It’s not completely wrong, but somehow just not my style. Sometimes they even have a GoPro on their helmet. If they film me with it, I’ll report it to the bicycle commissioner! Just so you know.

They are prevalent especially on weekends. Sometimes drunk. Often two or three of them on one bike. And something else that shocked me: seeing a father carrying an infant in a carrier resting on his belly. On the bike! Only one hand on the handlebar, with the other holding the baby’s head – because it can’t keep its head upright yet. How about not getting on the bike in the first place? At least no mobile phone…
Another thing: It’s not a rarity to see cyclists holding a second bike with one hand. They casually ride next to themselves on the bike, so to speak. But riding freehand with one bike each to the right and left was a first for me. Seen on a busy street in Cologne.

In the past, I felt a sense of panic when I saw them, because they are so slow and you had get in front of them right away at the traffic light to leave them behind you. Today this is no longer a problem because most of them now ride pedelecs. So when the traffic light turns green, they are usually faster off than any racing cyclist. And take one or two cars off the road.

Those who can’t afford or don’t want to use a cargo bike hook up a trailer. Mostly with children and/or dogs. I like it a lot. But the driver should not forget that there is usually a small person attached to their bike. Even the orange pennant doesn’t help if you go through the city traffic in suicide mode. There are also frequent debates about the fine dust pollution of the lungs of the kids riding at exhaust level. I’ve even seen facemasks being used.
Hooray to more trailers and cargo bikes and fewer cars on the roads.

They almost don’t count as cyclists anymore because they are too fast. And are hardly ever to be seen on bike lanes. My silent heroes of the city. But there are fewer and fewer of them. In Cologne at least, the number of sightings has gone down. Why is that? It’s probably all digitized now.

Food cannot be digitized. At least not outside the STAR TREK universe, where replicators do the job. So there always will be food delivery cyclists. Students with their own bikes and apps and those who use electric bikes provided by their employer.

They really don’t know what they’re doing. At least some of them. They don’t realize how fast they’re going – and what kind of harm they can cause. People who wouldn’t be using a bike anymore, now are back on them aided by a battery. Because you will always get back home, even if your muscles don’t carry you anymore. I actually think that’s a good thing. But if they turn into a rolling bomb, this is not exactly my cup of tea. Do you know how fast they can go? Without a battery, I would have a pulse of 260 before I even get close to these speeds.

What can I say? They are more streamlined and therefore certainly easier to drive, but I think they are definitely not suitable for urban traffic. Too low, too close to the exhaust, not visible enough. People who drive them in Cologne could almost be counted among the lunatics in my opinion. To boldly go where no one has gone before … or something like that. 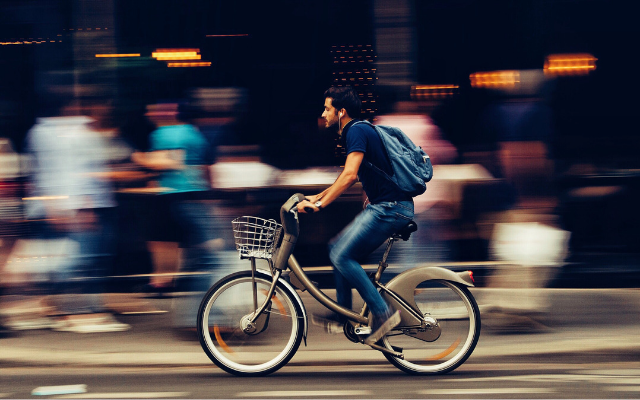 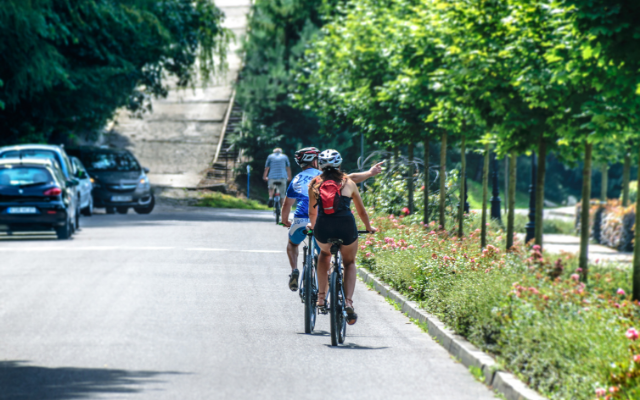 If I forgot anyone, please let me know. Gotta go now and return home. Across Cologne. On the bike. Through the madness. And with a smile on my face because it’s so much fun.

This article is a heavily abbreviated version of the bicycle series in our mobility blog. So, if you want to delve deeper into the world of bikes, read the whole series (available in German only)!

Anna Linn Zafiris is Head of Social Media within the Newsroom at TÜV Rheinland. She is a Cologne native with heart and soul. Nothing to add. That doesn’t mean she doesn’t love to trade Cologne Cathedral for views of temples, volcanoes, safari jeeps or kangaroos. But at the end of the journey: “Home is where the Dom is”. Because she not only supports her colleagues with digital questions, but also privately uses all channels that Web 2.0 provides, friends and family always travel online. If she doesn’t tweet, then she walks for hours through Cologne and collects bizarre photos from home on her Instagram account. And if iPhone doesn’t take any pictures, it’s in the airplane mode in the gym bag in the yoga studio.