Poor punctuality is always a key point of criticism of railway performance. Rightfully so. But let’s be honest: Is the German autobahn an alternative to trains in this respect? One year as a self-experiment.

I love both my work and my home. And it’s not too hard for me because although I live on the Lower Rhine and work in the south of Cologne, Germany, I can manage the almost 70 kilometers between the two locations every office day. I am really good at ignoring the many disadvantages of commuting. For example: I kept a logbook and found that year after year I spend almost 14 days on the road to or from work. That’s 326 hours a year.

Only one in three journeys are congestion-free

Every frequent driver and every commuter knows the feeling: Why is the traffic jam always exactly where I am at the time? The answer is simple, but has nothing to do with yourself: The traffic jam is only always where I am, because there is a traffic jam almost always and everywhere. At least in North Rhine-Westphalia, at least during rush hour. I can only manage one in three trips without traffic jams (and, of course, a few minutes of stop-and-go traffic at the motorway junction don’t really count as a traffic jam). I experience 4 to 5 kilometers of traffic jams every day. Traffic jams as a routine occurrence for me.

Are things worse than they used to be? Yes. The colleagues from the “Mobile Living” department – what a wonderfully ironic department name at this point – of Süddeutsche Zeitung opened my eyes at the end of May: In 2012, there were 640,000 kilometers of traffic jams on German motorways. By 2018, it was 1,529,000 kilometers. In 2012, there were 311,000 reports of traffic jams, six years later there were more than twice as many. Stuck right in the middle of it: me. And all the others as well. Where are they all going? And where do they come from?

Let’s face it: This commuter fate is often a result of personal choices. Nobody forces us to experience it – at least that should be the rule. What annoys me so much as someone who drives a lot voluntarily is the ranting about poor infrastructure in Germany. And ranting about the German railway system is even more annoying – after all, we drivers hardly ever use it. Trains are not a viable alternative. Comfort, costs, punctuality on trains? We’d better not talk about it.

But is this criticism justified? What about the punctuality rate for trains compared to motorways? Well, this can be precisely calculated with a little effort – even if it applies only to me personally. I did the self-experiment. One year of driving to work – almost the entire 70 kilometer commute takes place on the autobahn.

Train punctuality is at 75 percent

We apply the same test conditions as Deutsche Bahn, according to which a train is considered punctual if the scheduled arrival time has been exceeded by less than 6 minutes. A five minute delay therefore is still acceptable. Here we go… The 2018 punctuality performance of trains was at 75 percent in long-distance traffic, and at almost 94 percent when considering all passenger services. And what about my autobahn punctuality rate? According to my GPS, I need 42 minutes to complete the trip one way. Google Maps tells me that I would need 50 minutes for the trip from my home to my office. To improve my success rate, I’ll apply the most favorable scenario: Everything up to 55 minutes one-way is considered punctual in my test.

Autobahn punctuality rate is at 49 percent

No matter how much I twist the figures in my favor: The best I can do on the autobahn is a punctuality rate of 49 percent. All said, a one-way trip takes a remarkable 63 minutes on average – instead of 50 minutes (or even 42 minutes), as the GPS or Google Maps suggest – provided there are no traffic jams on my route. If only there were no traffic jams. But that only happens on one in two trips. Instead, I sometimes have no problem spending two hours on one journey.

So what now? Rationalizing the disadvantages

Will I react and change my commuting habits? No. Instead I do what many many others do – apply a combination of more flexible start times and rationalizations. Like everyone else in a traffic jam, I try to work during the school holidays. August is actually quite free of traffic jams. And I rationalize a lot to make driving more attractive than it actually is. You can hear a lot of WDR 5 on the radio or audio books or fine music to relax. You can really unwind and do some deep thinking, solve problems, talk on the phone, work a bit if possible. But does anybody really want to do any of this in the car? At least I don’t if I’m being honest. Relaxing evokes thoughts of a hammock rather than a traffic jam on the A4. Not to mention the stress the rides really cause. 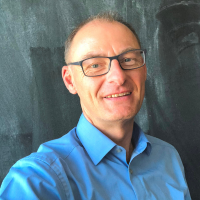 My name is Jörg Meyer zu Altenschildesche. I live near the Dutch border, which is bearable because I like French Fries Spezial, work in Cologne and therefore see the cathedral every day. I’m a press officer at TÜV Rheinland, but I don’t just speak – I’ve been writing for over 40 years. Of course, there were no computers or anything like that (at least not at home; after all, we had a lot of punch cards to play with, because my father worked in a data center). But many of the topics that moved me were exciting (or soon became so): Football or environmental protection, globalization or mobility, this ingenious Internet or the whole world.